From the “Food for Knowledge” newspaper for the project implemented by ADPP (Ajuda de Desenvolvimento de Povo para Povo) in Mozambique
Try to ask any of the older farmers in your area and they will tell you that the rains are not how they used to be. Some decades ago it was more or less certain that the rains would come in the middle of November, or at another given time depending on where you are in the country.
But nowadays, you cannot count upon this. Some times the rains start all right, but then they stop again for more than a month and the crops die during this drought spell. Or the rain starts much later, but then comes as torrential downpours destroying everything and leaving floods.
So, why do we have these changes? Are they just part of the natural variation in the climate, such as those, which have taken place throughout the history of our planet?
Scientists all over the world agree that we are not seeing natural variations in climate. What is happening is Global Warming caused by human activities? The burning of gas, oil and coal in industries, cars, ships, airplanes, etc. and the destruction of natural vegetation and soil changes our climate.
To understand how human activity can influence on a such large scale that the whole climate of planet Earth changes, one needs to understand some basic facts about greenhouse gases and about fossil fuels.
Greenhouse gases
Greenhouse gases are gases that are part of the natural systems on Earth. When the concentration of these gases in the atmosphere increase, they result in warmer temperatures. What happens is that they function just like a cover of glass. If you sit inside a closed bus and the Sun is shining, you can feel the temperature rise. This is because the sunlight passes through the windows, but the heat radiation is not able to get out through the glass. It is the same principle that is used in cold climates in greenhouses, where the plants are able to grow under glass or plastic cover because the temperature there gets warmer.
When there are more greenhouse gases in the atmosphere, less of the heat coming from the Sun is able to escape from the Earth back into space. Instead the atmosphere is warmed, resulting in warmer oceans and a warmer globe in general.

Where do these greenhouse gases then come from?
The main greenhouse gas is carbon dioxide, and it is produced every time something that contains carbon is burned – this can be fossil fuels, as we will explain later, or for example trees. When forested areas are cleared for agriculture, then the carbon that was stored in the trees and roots is burned – either directly by fire or by living organisms as they decompose. The result is that the atmosphere gets some extra carbon dioxide, and this contributes to the warming we are experiencing.
Deforestation, degradation of forests and soil erosion all contribute to global warming, and can at the local level totally destroy the natural balances.
Other gases, such as methane (part of natural gas) produced in swamps or from ruminant animals, or certain nitrogen gases formed from chemical fertilizer are also greenhouse gases contributing to global warming. (Many people think that the ozone gas is linked to global warming, but it has nothing to do with this. Ozone high up in the atmosphere is crucial for protecting us against the ultraviolet rays from the sun that can lead to skin cancer. But neither these UV rays nor the ozone contribute to global warming.)
The main problem, however, and the factor that has turned this into a global issue, is the burning of fossil fuels on an enormous scale.
Fossil fuels changing the climate
Fossil refers to something that existed or was formed millions of years ago. This is the case with gas, oil and coal. The huge coal deposits of Moatize, some of the world’s largest, were formed over 250 million years ago when the climate was warm and wetter. Huge tree ferns and other plants were buried in swamps where they did not decompose. Layer upon layer were deposited over millions of years, and the pressure and the hot temperatures resulting from this turned this dead plant material into coal.
Mozambique’s gas and oil deposits were also formed by organisms millions of years ago, but in this case it was not from huge plants, but tiny plankton (microscopic plants living in water) that settled on the bottoms of lakes and oceans.
The climate on Earth at that time was at least 10 degrees C. warmer than today, and there were no ice caps at the poles. The warm and humid climate made everything grow extremely well, and more and more organic material was therefore buried underground. The result was that much carbon was taken from the atmosphere and trapped in these layers underground. With less carbon dioxide in the air, there was less greenhouse effect and the temperatures gradually fell.
What is happening now is that the burning of fossil fuels is putting this carbon that has been trapped for millions and millions of years, back into the atmosphere. If we burn all the gas, oil and coal that was formed back then, then we create an atmosphere with so much carbon dioxide that the warming will continue for centuries. In the end we create a world with living possibilities for only a fraction of the current human population. Food production as we know it will be extremely difficult. Sea levels will rise by 80 meters when all the ice in the Polar Regions have melted. Most major cities of the world will be flooded, and there will be less land available.
It would take several centuries for these changes to happen, but they will happen if burning of fossil fuels continue.
Effects of Global Warming
The Earth has already warmed by 0.8 degrees since the industrialized countries started using coal and oil 150 years ago. The world’s governments know that something needs to be done, and have at the UN climate talks in Copenhagen in 2009 in principle agreed to aim for a maximum warming of 2º C. They have reaffirmed this commitment at the following annual climate talks, but they do very little to stop the disaster. Therefore many believe that the warming will be worse.
The World Bank recently published a report where the experts expect the world to be 4º C warmer at the end of this century. Even scarier is the fact that they predict that Southern Africa will warm twice as much as the global average.
The small temperature changes so far have already greatly affected temperatures and rainfall all over the world. See this figure, from the UN  Environmental Protection agency (figure designed by E. Bournay, UNEP/GRID-Arendal) showing how the number of global natural disasters has increased over the last decades.
Natural disasters 1980-2000 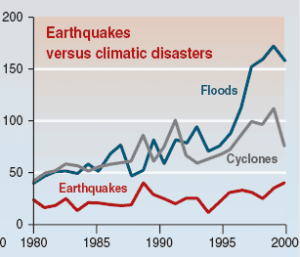 Food production will be greatly affected both by higher temperatures and by weather related disasters. We can expect a Mozambique, where many areas will not be able to grow maize, and we can expect more cyclones, destructive fires and floods. As a result of the higher temperatures, sea levels will rise – mostly because of the melting of ice in the cold polar regions. This means that people living in low lying areas such as in and around Beira, will have to move to higher ground.