You have heard about it in the radio. How Global Warming is already affecting the lives of millions of people around the world, and that this will only get worse.

Even if burning of fossil fuels stopped from today, our planet would still warm because of the greenhouse gases already in the atmosphere and the warmer oceans.

Add to this that there are no signs of any real changes. Globally in 2012, according to the World Resource Institute, 1,200 new coal-fired power plants were planned to be built – mainly in India and China, and consumption of coal is increasing every year, even in Europe (that is why foreign companies are investing in our country’s coal). Emissions of greenhouse gases increase year after year, while the countries mainly responsible for these – USA, China, India and Europe – participate in one global summit after the other, postponing the year of any serious action. Small steps are being taken, especially in Europe, but the bigger picture is that the world is no way close to stopping our planet from heating up at least 2 degrees C by 2050, as described in the recent World Bank report mentioned in the previous article.

Basically, there are two things people or governments can do to deal with climate change.

One is called mitigation. This means carrying out activities that reduce the amounts of greenhouse gases in the atmosphere or in other ways reduce the impact of global warming.

Even though Mozambique contributes just a tiny part of the global emissions of greenhouse gases, a number of activities should still be implemented to reduce even this small contribution to global warming.

The greatest reduction would come if Mozambique stopped exporting gas and coal. But since other countries would just buy these fossil fuels elsewhere, this would not change anything in the global picture.

There is also the question of the new hydropower dam on the Zambezi, the Mphanda Nkuwa. Most of the electricity will be sold to South Africa, and this will make it possible to cut down on burning coal in our neighbor country. This is good for the climate, but the government needs to ensure that the area of about 100 km2 that will be covered by water is cleared well before being flooded. Otherwise the organic matter under the water will turn into methane as it decomposes, and methane is a strong greenhouse gas.

On a smaller scale, the government should make it cheaper to set up solar panels by completely removing import duties. And it should establish financing systems, so that people can get loans for clean energy systems. The Greek government has here shown a good example, and it is now possible to get 100% financing for solar electricity systems in nearly all banks. This has in a few years made Greece one of the top countries in the world regarding numbers of solar systems per household.

Seen as a whole, Mozambique can do little to reduce global warming. And that is where the second type of actions comes in – adaptation.

Adapting to a warmer world is the sensible thing to do

Governments can do something, but people in poorer countries contribute very little to global warming. They are therefore left with the option of adapting to the changes that for sure will come. We need to be ready for a world with more destructive downpours, more heat waves, more droughts, more floods, more devastating bush fires, stronger cyclones, rising sea levels, more diseases as these spread into new areas and all the consequences of these calamities such as higher food prices, increased competition for arable land, climate change refugees and social conflicts in general as things heat up.

The above can sound very depressing, but the fact is that it is possible to do something about each of the issues.

What to do about food production?

Take the issue of food where it will be essential that many more communities become able to grow the greater part of their food needs. There is no doubt that we will need to change many of the current agricultural practices. Crops such as Irish potatoes will be more difficult to grow as the temperatures rise. With more irregular rains and drought spells it will be necessary to have irrigation to grow maize. More crops will need to be able to resist drought periods, and sorghum, cassava, moringa leaves and pigeon pea will be much more common ingredients on the plates. This means that we need to learn to make new dishes and get used to new tastes.

It will also mean the many more farmers need access to irrigation – to survive the drought spells during the rainy season, but also to grow crops year round. The greater part of Mozambique has groundwater less than 20 m down, and in most places it is a question of digging the wells and installing some kind of pump. This can start with more affordable pumps, such as treadle and rope pumps, and as electricity becomes available these can be upgraded with larger pumps. This will need lots of funding, and the communities will need to supply labor to dig the well, make the bricks for lining, etc. But if it is not done, the government and aid agencies will face much larger expenses in the form of emergency aid as one region after the other experiences hunger situations.

A part of the food issue is to become self-sufficient to a large degree. Not so that you cannot buy rice if it is not possible to grow rice in your area. But so that you can survive if for some reason it no longer is possible or affordable to import rice. This also applies to producing seeds and cuttings. Again not to the fullest level, but so that the region can produce a large part of the seeds or the plant material of the varieties that grow well in the area. The local farmers will need to learn these skills and it will be important to constantly select the best varieties and to be ready for changes.

With warmer weather and longer droughts it will be increasingly important to have fertile soils better able to maintain moisture and nutrients. The many existing techniques need to be spread to many more farmers – and where you are, you should just start trying some of them out: keeping the soil covered with mulch, ripping or using planting holes instead of plowing all the soil, never burning the plant residues, adding compost made of plant residues and manure, using charcoal dust to improve the soil, making compost with earthworms and adding this vermicompost to the soil.

Some systems take longer time to implement, such as planting or letting msangu trees (Faidherbia albida) and other leguminous trees grow up in and around the fields so they can increase soil fertility. But they are worth the effort. Half a million farmers in Tanzania, Malawi and Zambia have done it, and some report that as result their maize harvest under the trees have doubled or tripled. 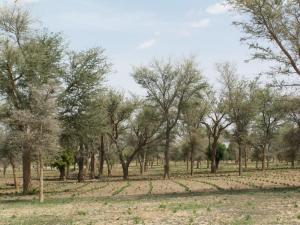 The healthy vegetation of such trees or naturally occurring bushes and trees also reduce damages from torrential rains and improves biodiversity so there are more birds, insects and mammals to keep numbers of destructive pests down.

The areas along the large rivers, for example in Gaza and Sofala, will need to adapt to more frequent floods. Floods occur when large amounts of rainwater rush down rivers and burst the banks. And when the dams upstream are forced to let some of this rainwater out.

An important way to reduce these sudden increases in river water is to maintain or restore the natural vegetation upstream. When there is a healthy cover of trees, bushes or grass, then more water is absorbed in the ground and less water rushes along the surface. This reduces soil erosion and reduces the amount of water suddenly gushing down the river.

Preserving or reestablishing wetlands is another natural system to deal with floods. Large wetland areas can absorb much of the water gushing down the rivers, and there will thus be less water to flood the fields. In many places, the problem is that all these wetlands have been turned into fields.

People in the low lying areas need to protect themselves by constructing dykes along the rivers and around the fields. Special vegetation can also help break hard soil layers that prevent water from seeping into the soil. Trees that can survive flooding, such as msangu should be planted in the fields, or vetiver grass with its long and strong roots should be planted as fences around the fields in flood-prone areas.

With a hotter climate, powerful bushfires will become more common – unless we prevent these. In some places it will be sufficient to make and maintain good firebreaks. This might not always be enough, and then you will have to organize controlled bushfires. Such smaller fires at the start of the dry season can be controlled and will only burn dry grass and some bushes. The result is less dry material later in the dry season and you can thus avoid large destructive fires.

As you can see, there are many things you can start at your school or in the community. But it is also clear that most of these activities require that we stick together. Going it alone will not make us overcome the hardships ahead.